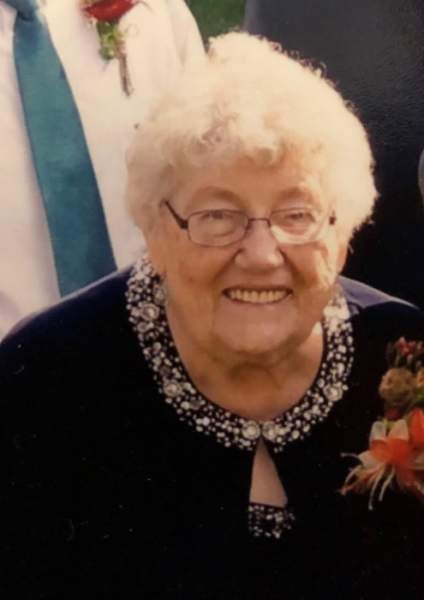 Menda, her brother and sisters worked hard with their parents on the farm, milking cows,

and performing many household and outside chores. Sometimes though, they forgot what they

were doing and chores that started out well-meaning unraveled into playfulness, mischief and

sometimes disaster. When it was Menda’s turn to gather eggs, she found out that if she placed

the eggs in her pockets just so, they would all fit. You see, the coat was a hand-me-down from

Ann to Helen to Menda, and the pockets were not pockets at all, but went down to the hem of her

coat. Now she had developed a system of carefully lining the eggs around her hem and walking

painstakingly to the house. One day Menda was walking to the house with her day’s find when

Helen came along. “Let’s race!” she cried, and they were off! She arrived at the house panting,

with egg yolk dripping in a circle where she stood.

Trusting Christ as her Savior at an early age, Menda joined the Zoar Mennonite Brethren

Church when she was twelve. The biggest impression in her young life was her father, on his

knees at family devotions, praying for his unbelieving brothers and their families. Years later,

faith in the Lord.

Menda graduated from Zoar Academy and later attended Tabor College. While at Tabor,

she met a handsome young man named George F. Kliewer and they were married on November

kitchen and over the years developed her culinary skills, concocting delectable recipes for family

dinners and holidays. She displayed tender loving care for residents at Pleasant View Home for

over 30 years. She also joined George and children while they went on the road custom

harvesting in Oklahoma, Kansas, and Nebraska.

The most important part of her life was helping spread the Gospel of Christ. They

pastored at both the New Hope MB church (Joes, CO) and at Southwest Baptist Church (South

Hutchinson, KS). Early in their marriage, they were even led to help with a mission in Mexico,

which had to be cut short due to serious illness. They helped out wherever the Lord called them

and entered every door He opened for them to be a witness. They spent evenings with a group

from Zoar to help at the Wichita Rescue Mission. Mom read her Bible every evening. She spent

their Bibles, kneel to pray, and walk with Him.

To order memorial trees or send flowers to the family in memory of Menda Kliewer, please visit our flower store.