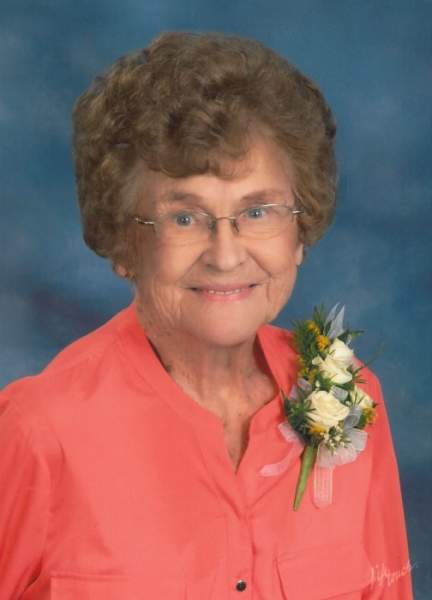 Esther F. Ediger Nikkel was called home by her Lord and Savior, Tuesday, April 14, 2020 at Pleasant View Home, Inman, Kansas at the age of 92.

Esther was born April 10, 1928 to Solomon and Agnes Ediger of Inman, KS.  She was the youngest of seven children and attended Lake Valley grade school and was a graduate of Inman High School.

She married Leland Nikkel on May 20, 1948 and became a farmer’s wife for 58 wonderful years.  She was an amazing homemaker and many family members received her wonderful baked goods.  Anyone of us could have dropped in at mealtime and have a home cooked meal in 30 minutes.  But her biggest attribute was being Leland’s best farm mechanic!

She and Leland supplemented their income during winter months driving bus for Inman School District for over 20 years and their favorite was taking the basketball team to their games! She loved her church and Lord Jesus and was baptized on her confession of faith on May 28, 1944 by Rev. A.J. Dyck.  She became a member of Hoffnungsau Mennonite Church for 80 plus years.  She was always willing to help and held many offices in the Happy Hour Quilting Circle.

Due to the current Covid-19 virus and the stipulations surrounding it, their will be a private, family only graveside service held on Saturday, April 18, 2020 at Hoffnungsau Cemetery.  Please check our website, www.inmanfh.com for a recorded service and video tribute. A celebration of life will be held at a later date.  In lieu of flowers, the family suggests memorials made to Hoffnungsau Church and mailed to the Inman Funeral Home at PO Box 490, Inman, KS  67546.

To order memorial trees or send flowers to the family in memory of Esther Nikkel, please visit our flower store.